The Dress That Eats Souls: A Robot In Progress

Lucid Possession, a multimedia performance, premiered at Roulette in Brooklyn, and combines musicians, VJ mashing, and stage-controlled robotic projection screens to present a contemporary ghost story – a poetic musing on managing the mass of information “noise.” Todd Reynolds live scores and composed the finale. Hai-Ting Chinn stars in the video and sings onstage. I run all cues from the stage and scrub video across multiple screens. Elliott Sharp composed the song cycle. The technologies of Lucid led me to a new installation project.

Lucid Possession and The Dress That Eats Souls will be part of a retrospective on my interactive work to be presented in early 2018 at The Ringling Museum in Sarasota, Fla.

First a little on Lucid Possession. The central character, Bean, is a young artist who designs virtual personalities and is plagued by ghosts. Her mind is like a live Twitter feed that “picks up people” …but without technology. She creates an avatar, an exaggerated alter ego that goes viral on the Internet and makes her a minor celebrity. People stop her on the street. They want something, and she isn’t sure what it is. Anxiety exponentially increases her paranormal sensitivities, and a ghost from the past emerges from the noise.

I was thinking about the way we live in analog and virtual worlds simultaneously – how we live an augmented reality through social networks and online connections that merge with our life in the physical world. It’s ordinary – but fantastic. A TV remote, social networks, ATM machines – they’re like pedestrian spoonbending. With telepresent agency – our bodies extend beyond their edges. Our boundaries blur. I was also thinking about how this landscape has turned us all into performers grasping for attention in a sea of market share. Everything becomes a popularity contest. How many likes for your cat video? Here’s a clip from the premiere.

Making Lucid Possession involved creating a complex intranet – an engine of linked technologies with many elements that included the production of LED costumes and robotic screens. The expansion of my technical vocabulary combined with further experiments with embodied interface inspired me to focus more closely on some of the possibilities these elements presented.

Building Lucid’s robotic screen: from sketches, to construction, to the projection of Bean’s Avatar. The arms and legs are selectable video loops scrubbed in real time. The head uses a neural net and vocal analysis to lip synch live to a performer. The robotic screen is controlled by motion sensing onstage or by OSC on an iPad. 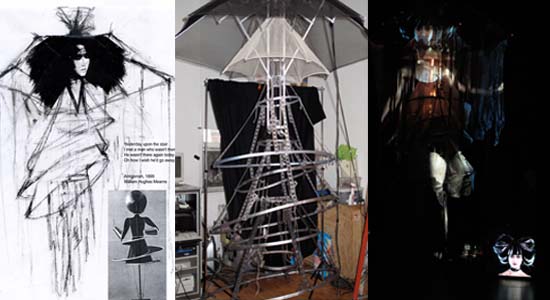 The costumes were constructed with LEDs. This was before the current explosion of Raspberry Pis and micro controllers, conductive thread and flexible electronics for wearables. We had a guy with a soldering gun running around after our actors during the film shoot. In 5 years there’s been enormous advances in wearable technologies and the availability for easy use is everywhere. Karen Young: Costume design, Leif Krinkle: technology and controls. 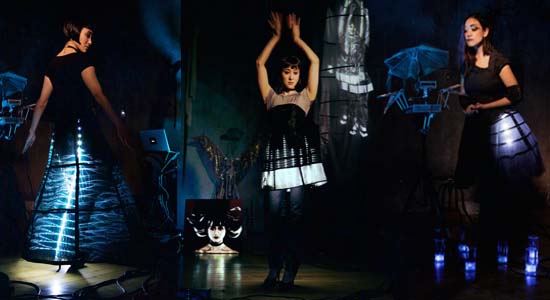 I began thinking about the explosion of technologized wearables. It seemed to be dominated on many fronts by the fusion of narcissism and commodification. A new installation project started to percolate. The first sketch:

THE DRESS THAT EATS SOULS: An Interactive Robotic Dress Installation

progress, n. a forward movement: an advance: a continuation: an advance to something better or higher in development: a gain in proficiency: a course: a passage from place to place: a procession: a journey of state: a circuit. – v.i. progress, to go forward: to make progress: to go on, continue: to go in progress, travel in state: to go.Chambers 20th Century Dictionary

Xenophanes: “The gods did not reveal to men all things in the beginning, but men through their own search find in the course of time that which is better.” 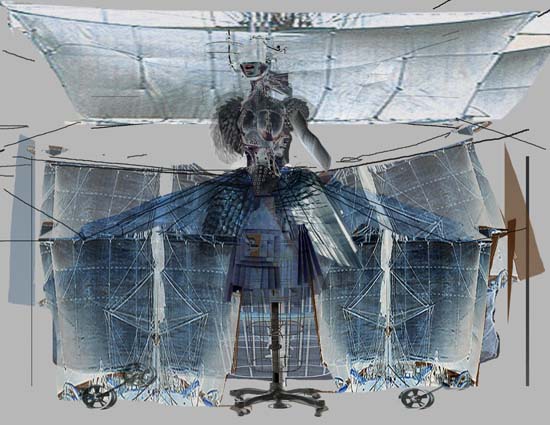 The Dress has a 14′ layered scrim skirt that acts as a projection screen and a cinemascope rear projection screen that hangs overhead. The robotics of the bodice and skirt are controlled by a kinect gaming interface. As a viewer standing in front of the Dress moves, the Dress mirrors their movement. It behaves as if you are wearing it. The Dress speaks to you. It’s rather chilly – like a lizard. It’s the combined human agendas that drive technology. The installation cycles between the Dress speaking and POV experiences on the overhead screen and skirt that put you inside the minds of the people who have worn the Dress as it evolved – 200 years of the human body shaped, molded and colonized by technology. Viewer head movement navigates the cinema space.

So I’ve started to build and script it. Brooklyn Research is working on the Robotics. Rene Steinke, the novelist, is working with me on the voices. Tommy Martinez is programming. Paul Geluso is designing the spatialized sound. Ben Light is prototyping and constructing elements of the Dress design. Leif Krinkle is technical director. Karen Young is helping with costume construction. Andy Dintenfass and Art Jones are shooting the video material with me. And many thanks to students from Parsons Design and Technology for their labor and brainstorming. Here’s some of the prototyping and building process: 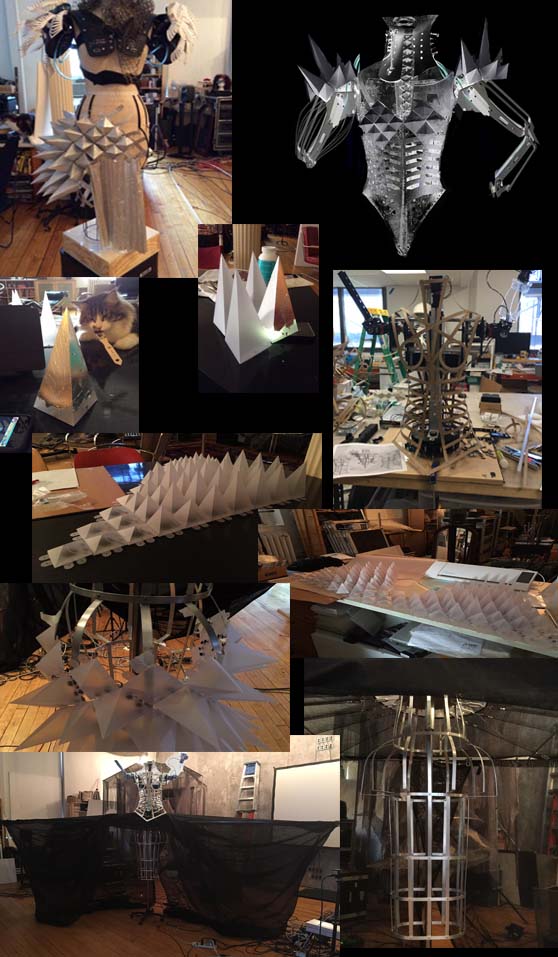 First: lots of testing and discarding elements to discover the best way forward. Finally: building the robotic screen system. Robotics building and testing is going on at Brooklyn Research. The first Kinect test with Johnny Lu. Then the more evolved version – a serious robot!

We’re simultaneously building the skirt and bodice elements, testing media and programming navigation on a small mockup of the installation at the studio. This video shows Tommy using the kinect. The white cube in the first section shows how the Kinect sees and tracks his head movement. The second section shows how he navigates between 5 video streams with head motion.

Stay tuned for further developments as The Dress That Eats Souls evolves!

The Dress That Eats Souls: A Robot In Progress