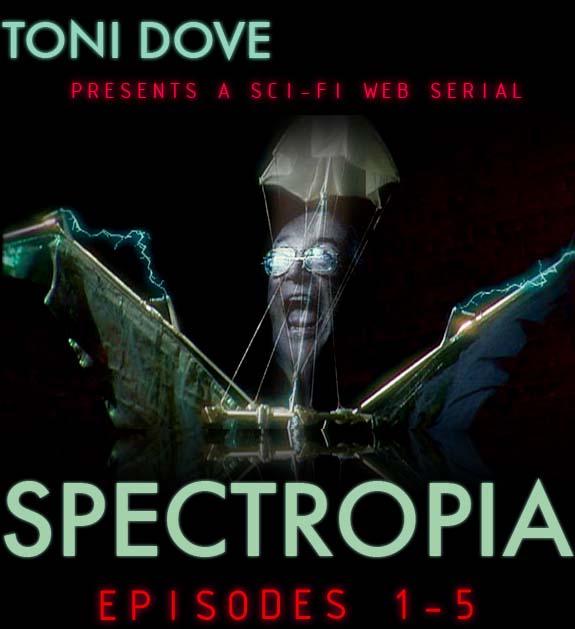 Spectropia is a hybrid of sci-fi and film noir, with elements of time travel and telepathy. The story opens in the future where Spectropia, a young woman in her twenties, lives in the salvage district of an urban center known as the Informal Sector. It’s a black market subculture of salvage and barter where knowledge spans only a person’s experience and recorded history is forbidden. More info in the Spectropia category on the right

Elliott Sharp composed the soundtrack for Spectropia. Check out his CD Spectropia Suite featuring the song “This Time, That Place”, Vocals by Debbie Harry and his CD Incident that includes songs written for Toni Dove’s Lucid Possession with vocals by Hai-Ting Chinn and Bora Yoon. More info below.

The adventure begins. The future, 2099. “Give it a minute, it might grow on you.” It’s a black market subculture of salvage and barter where knowledge spans only a person’s experience and recorded history is forbidden.

SPECTROPIA Episode #2: “Maybe I can find him”

The future scans the past. Spectropia searches for her father, lost in time looking for a vanished family inheritance.

Spectropia finds herself in the body of another woman in another time.

SPECTROPIA Episode #4: “What planet are you from?”

Spectropia inside Verna’s body navigates a strange romance and an old mystery.

Spectropia gets a grip and begins to understand how it all works. The Duck worries some more.

The film’s cast features the actress Aleksa Palladino (Sidney Lumet’s Before the Devil Knows You’re Dead and Find Me Guilty; Todd Solondz’s Storytelling, Boardwalk Empire) as Spectropia and Carolyn McCormick (Law and Order) as Verna, Simon Jones as the Duck (Arthur Dent in The Hitchhikers Guide to the Galaxy, 12 Monkeys), Richard Bekins as William (Mad Men, The Good Wife)Helen Pickett (recently with the Forsythe Ballet of Frankfurt and The Wooster Group) as Sally, Paul Lazar as Eddie (Manchurian Candidate, co-director Big Dance Theater)

Elliott Sharp and the ’31 Band featuring Debbie Harry and Sirius String Quartet: “Spectropia Suite” (Neos Jazz 40905) 22 relatively short segments whose stylistic range oscillates between E#’s renowned computerized action, über-distorted and typically twisted guitar solos, swinging big bands (“an imagined meeting of the music of Duke Ellington and Edgard Varèse”), and XX century chamber music (the gorgeous “Folding” and “Unfolding”, executed by Sirius with soul and brain). The rock ballad “This Time That Place”, sung by a Marianne Faithfull-like Debbie Harry — “Heart Of Glass” has never sounded so distant — constitutes the main theme of the opus appearing in various instrumental guises all over the CD.

Elliott Sharp: “Incident” Including unusual songs from Toni Dove’s multimedia work Lucid Possession sung by Hai-Ting Chinn and Bora Yoon. The opener, Send Us A Message, features Hai-Ting’s crystalline soprano over a lattice of Sharp’s unique and lush guitar sounds. Avatar Star shows off the power and beauty of Bora Yoon’s voice over a hard metal track with electric sitar. Viscus Non Exurum is a medieval chant sung in ‘fake’ Latin by a double-tracked Hai-Ting.

You can also find Spectropia on
Vimeo, Youtube, Film Skillet and Reel House.