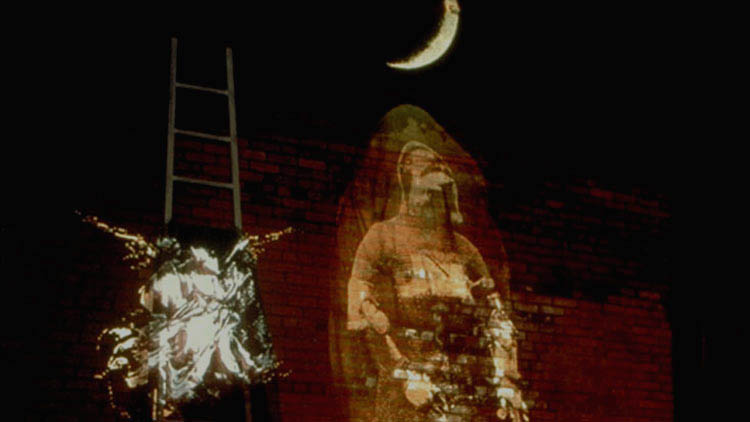 Mesmer: Secrets of the Human Frame, 1990, is a computer-driven slide installation with a soundtrack. The images are projected onto a wall and onto net hung in a ladder . The net creates hologram-like three-dimensional effects. Computerized dissolve equipment produces sequences of images which are animated somewhat like a film. The soundtrack consists of monologues by characters and processed electronic sound and music. The soundtrack was composed entirely from electronically processed vocal sound. The installation runs for 12 minutes. It is fully animated – it runs through two shows and rewinds and runs again until shut down. The piece also exists as a 25 minute radio piece which was aired on numerous National Public Radio stations as part of the 1991 New American Radio Series.

Mesmer, Secrets of the Human Frame” was conceived at the intersection of the birth of psychoanalysis, the origins of cinema and the transformations of the industrial revolution. It is a “philosophical toy” which makes reference to those machines which were the precursors of cinema and to the gothic novel, a genre which helped give this piece its form and is itself the precursor of science fiction.

The Voices:
Freud: (1856 – 1939) Austrian psychiatrist. Founder of psychoanalysis.
Dora: A patient of Freud. Her case is documented in Freud’s monograph Dora: An Analysis of a Case of Hysteria, 1905.
Echo: A Nymph. Punished by Hera for distracting her from Zeus’s philandering. She can no longer speak in her own words, but reflects back the words of others.
Cyborg Angel: Part angel, part human, part electronics. She is wired as a video camera with her eyes and ears as input channels.

A fractured icon, an unstable portrait, a piece about the construction of identity, not really a narrative, a piece with a narrative caboose, a reference to the colonizing aspects of culture, a platform from which to speak, not exactly a movie, a piece about finding and losing your voice.

I have come to think of this project itself as an android or a robot.